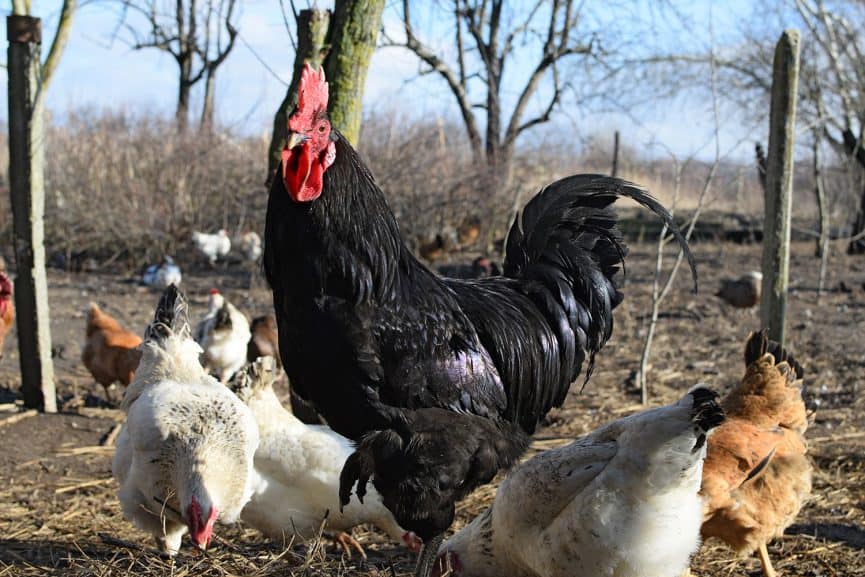 A few weeks ago, I was in my barn when I heard our rooster outside making a ruckus (yes, my family has a barn and chickens…). I ventured out to see what all the fuss was about. The first thing I noticed was the rooster, puffing his feathers and fluttering up and down. I looked for the rest of the flock and eventually found it hidden away in the pine tree behind the rooster. Trying to understand the reason for the commotion, I looked to the sky and noticed a hawk circling around the backyard. I was impressed. The hawks have flown away with several of our chickens in the past, but not this time. The rooster (a.k.a Captain Catwoman, as named by my children), had moved the flock to safety and was doing all he could to defend against the circling predator.

This incident got me thinking. In addition to fertilizing eggs, the role of a rooster is to lead the flock — to keep the hens safe from danger. Given that I see the world through the eyes of an Organizational Psychologist, I started to reflect on the parallels between leadership and our rooster “leaders.” In our four years of owning chickens, we have seen both effective and ineffective leaders for many of the same reasons that we see leaders strive or fail in our consulting work.

Here are a few of the highlights of our rooster leadership profiles:

Captain Cluck – Leadership through fear. Captain Cluck was our first rooster and everyone knew he was in charge. So much so that no one wanted to be around him. He was dominant, overbearing, and it was his way or the highway. He crowed constantly. He was aggressive and regularly pecked at the hens, so much so that he harmed many of them. When my family was anywhere near the coop, he would stand in front of us and fly up and down in our faces. On several occasions, he chased my kids. He was in charge, but only through fear.

We all know leaders who fit this profile. When this leader is in the meeting, no one else talks. There is a lot of over planning for communicating with this leader because the wrong message will get someone in “trouble.” This leader is intimidating so people are afraid to speak freely. People feel stifled, which leads to a lack of idea sharing and creativity. The ultimate motivation for this kind of leadership is “survival.” This forced focus on keeping your job starts to dominate, often at the expense of taking care of customers, innovation, or flawless execution. As such, it is difficult for a team to last and thrive under this type of leadership.

Sammy – The Brown Noser. Our second rooster, Sammy, LOVED humans (a.k.a., his bosses). At first, my family enjoyed being around Sammy because he was so interested in what we were doing and wanted to be part of the action. He was endearing and entertaining. The problem was, he took it too far. Regardless of where the hens were, he would stand at our back door, longing to come in. Rather than sleeping in the coop at night, he slept on our patio couch. Any chance he could, he would run into our house. On several occasions, we had to remove him from our bedroom and bathtub. When we took measures to keep him away from the house, he showed up in our neighbor’s yard. We would get phone calls where the neighbor would say, “Your rooster is in my backyard. He’s staring at me right now through the window. He’s not bothering us, but thought you would want to know!”

The flock suffered from his lack of attention. During Sammy’s reign, we lost hens from foxes, raccoons, and hawks. He never much cared how they were doing, if they were safe, or well-fed.

Sammy’s profile represents leaders who succeed because they are good at “managing up,” but fail to look out for the best interest of their teams. Leaders who are “yes men/women,” regardless of the toll it takes on others. This type of leader often avoids sharing “reality” with his or her superiors. They agree to unrealistic deadlines or deliverables and then blame the team when they are not met. They focus on impression management vs. getting results.

While “managing up” is part of being successful in any organization, when taken to the extreme it results in a team that is frustrated by playing the political game rather being held accountable for doing excellent work. It sends a message that the boss is more important than the team, customers, or the mission of the organization. This type of environment is rarely conducive of earning employee commitment or willingness to go the extra mile.

Back to Captain Catwoman – Leadership Through Respect. My family agrees that Captain Catwoman is the most “effective” and well-loved rooster we have ever had. He is aware of the flock at all times but allows the hens to roam freely. When there is a threat (such as a predator or harsh weather), he is able to quickly round them up and get them to safety. When he finds food, he crows so they all have the opportunity to join in on the feast. Even my kids love him; my four-year-old, who used to be afraid of going in the coop, now loves to gather the eggs each morning.

In my work, I get to work with amazing leaders every day that have earned their “followership” by respecting the people they work with. They get to know their people and ask their opinions. They don’t always have to speak first, but when they do speak, they have something important to stay. They focus on getting results by empowering their teams and leveraging their strengths. They create an environment where it is ok to make mistakes, as long as we learn from them. Their leadership is not self-serving; it is about accomplishing a higher goal. They are admired and respected because that is how they treat others.

As leaders, we all have a choice about the style we choose to adopt —fear, managing up or earning followership through respect. What’s your profile?