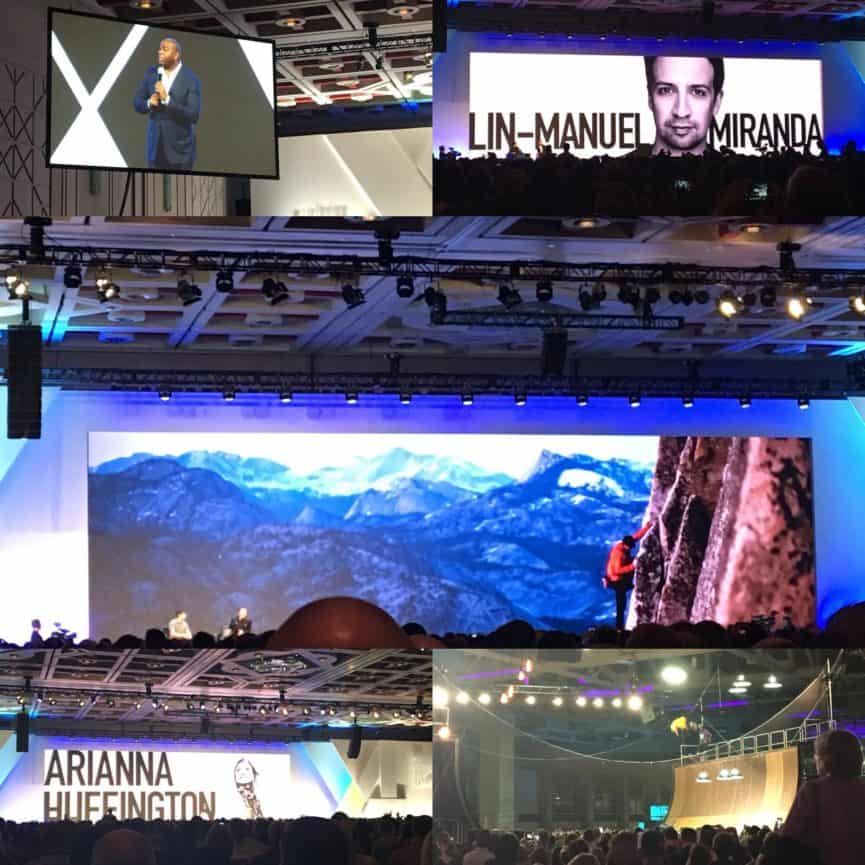 I don’t know about you, but I love conferences. I leave feeling energized, I love racing from session to session, packing in as much learning as possible, and meeting lots of brilliant people. I recently attended a conference in Salt Lake City with some of my teammates. In addition to time with the team, meeting clients (some for the first time face-to-face), and enjoying evening entertainment, I was looking forward to an all-star lineup of keynote speakers. I’m talking about Lin-Manuel Miranda, creator and actor for the Broadway hit Hamilton. I’m talking about Earvin “Magic” Johnson, basketball star and current president of the LA Lakers. I’m talking about Tony Hawk, the skateboarding icon, and Arianna Huffington, co-founder of The Huffington Post. I’m also talking about Alex Honnold, who is the only person to have ever free-soloed the cliff El Capitan (i.e., no ropes!).

I knew I would enjoy hearing from this amazing group of people. What I didn’t expect was how much I would reflect on their leadership. This group reminded me that we need incredible leaders to achieve, inspire, and challenge what’s possible. Here are some of my leadership lessons learned from Lin, Tony, Magic, Arianna, and Alex.

Leaders have a BHAG and know it will take time.

Each of the leaders we heard from at the conference had a BHAG (“big, hairy, audacious goal,” as termed by Jim Collins). They also knew that achieving their BHAGs would take time, persistence, and focus.

Take Alex Honnold, for example. Honnold described his El Capitan climb as a 9 year journey. The climb is typically done over several days, with climbers setting up camp overnight on the face of the cliff. Honnold decided he wanted to climb the mountain in a single day. And, that he would free-solo the climb. Can you think of a bigger or hairier goal than wanting to climb a 3,000-foot mountain face without any ropes, harness, or safety? Honnold decided it was possible. He decided to train (and train, and train). He carefully planned each movement, practiced the route over and over (while on ropes) to commit it to memory, and built up the speed required to finish the route in record time. On a June morning in 2017, after 3 hours and 56 minutes, Honnold stood successfully at the top of El Capitan. Honnold said that his solo climb was like performing a dance routine because he prepared and knew it so well. Honnold embodies the idea of challenging what we know is possible and putting in the work to make it happen.

As another impressive BHAG and persistence to see it through, consider what Lin-Manuel Miranda accomplished with Hamilton. Guess how long it took Miranda to write the show? It took one year to write the first song, “Alexander Hamilton,” and another full year to write the second song, “My Shot.” In total, it took Miranda six years to write the show. Six years! Impressively, the songs in Hamilton cover more than 20,000 words, meaning they have to be sung at roughly 144 words per minute to be delivered in the 2.5 hour show. Miranda joked that Hamilton had to be written as a rap – any other song form would have taken 10 or more hours to perform. Turns out his hairy goal and the six years of work were well worth it – Hamilton has won 11 Tony awards, earned a Pulitzer Prize for Drama, and set box office records for grossing the most money in a single week.

Setting the direction with a BHAG and getting everyone on board is useless if leaders fail to solicit feedback and check-in on progress frequently.

Miranda, for example, had written the song, “Alexander Hamilton,” but was unsure whether it would be well received or not. He had an opportunity to showcase the song at the White House for the Obamas. Miranda decided that if it didn’t go well, he would put the song in a drawer and move on to the next project. Needless to say, the song went over well.

Leaders lift up others to succeed.

Strong leaders know they create success through their own efforts and the efforts of others they lift up along the way.

Magic Johnson earned his nickname in high school after a particularly impressive basketball game (he scored 36 points, had 16 rebounds, and 16 assists in that single game; NBA.com staff, 2018). Another part of his ‘magic’ was Johnson’s understanding and willingness to pass the ball. He knew how to share the ball with his team, how to catch defenders off-guard with a pass rather than a shot, and when to take advantage of a teammate in a good position. Johnson knew how to elevate his performance and others’ with a simple pass.

Tony Hawk is well-known for his skateboarding, both in the park and in video games. According to Hawk, this isn’t his real legacy, however. His real legacy is the Tony Hawk Foundation, which has built over 400 skateparks around the world, including all around the U.S. and in Afghanistan, Cambodia, and South Africa. The foundation provides access to a place where kids can productively and safely spend their time, get exercise, and build self-esteem. Hawk shared his own passion for skating by empowering youth and building communities. It’s about so much more than skating.

Miranda also expressed the importance of bringing out others’ genius as part of his own success: “It’s so easy to get pulled into the role of the genius, acting big so others have to act small.” Miranda said that songwriting is his passion and genius, but that without all the others involved in creating Hamilton, his vision would have never come to the stage.

Leaders anticipate and are proactive, rather than reactive.

The best leaders are proactive and anticipate what’s on the horizon.

Arianna Huffington co-founded The Huffington Post. Moving full speed ahead in her career, Huffington didn’t realize how severely her health and well-being were declining. That is, until one day when she collapsed at her desk. This was a real wake-up call for Huffington. She has since left The Huffington Post and started Thrive Global, which aims to help people enhance and prioritize their well-being. Huffington advocates that we must prevent burnout, not respond to it. As she stated in her talk, “It’s never been easier to run away from ourselves,” referring to constant access and dependence on technology. Rather than be at the whim of our devices, at the will of constant email and phone messages, or at the mercy of everything that demands our attention, Huffington coaches people to proactively unplug, strategically use their time, and consciously manage well-being. A lesson learned better late than never, it is important to be proactive rather than always being reactive.

Leaders are authentic, role models, and a living expression of their values.

The clearest message from the leaders I’ve been writing about is not something they said or had to articulate at all. Each of these leaders has achieved their goals, inspired those around them, and challenged what’s possible because they are authentic, consistently act as role models, and endlessly live their values. Their leadership is not in what they say, but in how they act and how they make others feel.

Tony Hawk is skill skating at almost 50 years old (next month!). Magic Johnson said that in a game of basketball with his daughter, he would let her score 9 points, but couldn’t help but win because he’s a fierce competitor. Arianna Huffington is an avid user and advocate for her Thrive app, putting her phone ‘to bed’ every night, and getting good sleep. Lin-Manuel Miranda can break into song at any moment. Alex Honnold is still climbing, living out of his van, and thinking about his next adventure.

What a reminder of the importance of leadership. If you want to accomplish great things, you have to set great goals, inspire others to join along the way, and challenge the thinking of what’s possible.